Enrolling your child at KHPS gives you the option of involvement in the English/French bilingual program.

This program was established in 1999 and is now offered as an option from Kindergarten to Year 6, in the majority of classrooms.  Our first group of bilingual students progressed to Killarney Heights High School in 2006 and completed their High School Certificate studies in French in Year 10, following an accelerated program.

The aim of the program is two-fold.  For children of French speaking parents, it is to reinforce their native tongue as a living language in an Australian school environment with an Australian curriculum.  For non-French speaking background children, it is to give them the experience of another language and culture in a natural way, not unlike the way they first learned to speak English.  For both groups of children, the program taps into their natural ability to acquire language.

Rather than separating out the French activities or translating lessons, topics in all Key Learning Areas may be taught in both languages. There is also more intense formal instruction for the native French speaking children each day.

Learning about history in small groups through French language

Return to top of page 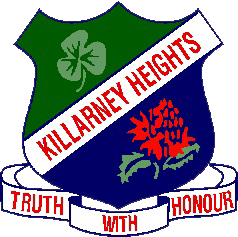